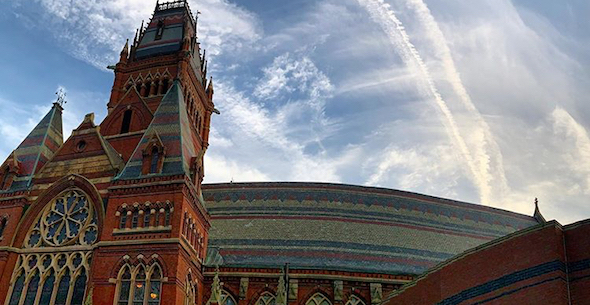 HARVARD SQUARE AT YOUR FEET

If you’re itching to explore the Square or perhaps, visit for the first time, then take a self-guided walking tour! You can build your own map and soak in the sights. To spend a few hours getting better acquainted with Harvard Square, we recommend visiting all the spots on this loop.

Stop One: Harvard Square Plaza Start at Harvard Square Plaza, which sits above the Square’s underground hub for public transportation. In the center of the plaza you'll find Culture House, a community space resembling a cozy living room. This iconic structure is historically significant because of its origins as a newsstand called Out of Town News. Out of Town News was a Harvard Square fixture that sold international newspapers and magazines for over 60 years. It is now listed in the register of historic places.

Stop Two: Wadsworth House From Harvard Square Plaza, walk across the street to enter the focal point of Harvard Square: Harvard University! Your entry point is by the yellow-paned home to your right. The Wadsworth House is the second oldest building at Harvard. Built in 1726, it served as the home for Benjamin Wadsworth, the president of Harvard at the time. Later, George Washington set up his first Massachusetts headquarters there.

Stop Three: Harvard Yard Continue walking past the Wadsworth House, and now you’re in the thick of Harvard Yard. Memorial Church stands at the center of the yard. Nearby Massachusetts Hall remains the oldest Harvard building (older than the US itself!). Another must-see spot is Holden Chapel, which captivates in its simplicity. Completed in 1744, Holden Chapel boasts being one of the oldest college buildings in the nation. Speaking of collegiate history, in the Yard you can visit the statue of John Harvard, Harvard’s founder. Rub his golden left foot for good luck. Then stand in awe of the expansive Widener Library.   Stop Four: the Fogg Museum As you imagine the Harvard legends who walked the grounds of the university, make your way toward Quincy Street. You’ll see the steps leading to the charming Fogg Museum, one of three museums under the Harvard Art Museums umbrella. The Fogg, Harvard's oldest art museum, opened to the public in 1895.

Stop Five: Carpenter Center for Visual Arts Head down Quincy to see Harvard’s Carpenter Center, the only North American building designed by famed architect, Le Corbusier. Walk up its ramp and soak in city views at the top.

Stop Eight: Busch Reisenger Museum and Arthur Sackler Museum Loop back past Broadway Marketplace toward Prescott to see the Harvard Museum that houses Germanic fine art. The second in the Harvard Art Museums trinity, the Busch Reisenger Museum was built in 1901. A bit further down the street is the third Harvard Art Museum. The Sackler houses Harvard’s collections of Mediterranean, Asian and Middle Eastern art.

Stop Nine: Memorial Hall Move from the museum toward Quincy Street, follow it down and cross Cambridge Street. Before you, you’ll see one of Harvard’s most famous attractions. Memorial Hall was built in 1870. This High Victorian Gothic structure pays tribute to Harvard graduates who fought in the Civil War. Curbed Magazine named Memorial Hall one of Boston’s best interiors. Within its walls is Sanders Theater and Annenberg Hall.

Stop 10: Swedenborg Chapel Built in 1901, Swedenborg Chapel looks like it came straight out of a storybook. You can get lost in thought gazing at this New Jerusalem chapel — quaint and solitary, beautiful nonetheless. Head here by continuing on Quincy and then turn right onto Kirkland Street.

Stop 11: Harvard Museums of Science & Culture Walk straight down Divinity Avenue to the Peabody Museum of Archaeology & Ethnology and the Harvard Museum of the Ancient Near East. Peabody was founded by philanthropist George Peabody in 1866 and still occupies its original building. HMANE was established shortly after and houses archaeological collections from Egypt, Israel, Iraq and Syria. Just across the road is the renowned Harvard Museum of Natural History.

Stop 12: Science Center Stroll across Oxford Street on the crosspath that connects the Yard and visit Harvard's Science Center. This center for innovation is where Harvard minds shape the future.The Science Center is also home to a fascinating HMSC museum called the Collection of Historical and Scientific Instruments. There are 20,000 instruments on display covering the history of science pedagogy and research from the Colonial era to now. If you’re not into science, the building's modernist architecture still makes for an interesting space to walk with your thoughts.

Stop 13: Old Burial Ground Walk back through the Yard to the Johnston Gate and cross to the Old Burial Ground on Garden Street. Since the cemetery has been around since 1636, the spirits of past Harvard presidents may keep you company there!

Stop 14: the Brattle House Come back to the Square down Brattle Street, and stop at the Brattle House. The Brattle House was home to Tory General William Brattle until 1774. Then it served as headquarters of the Commissary General, Thomas Mifflin who was frequently visited by George Washington. Today the Cambridge Center for Adult Education holds classes at the house.

If you look beyond the Brattle House, you’ll see that you’re back at the Square’s public transportation system by Harvard Plaza. Before you call it a day, you could pop into The COOP for a piece of Harvard Square to bring home. You could also snap some post-tour selfies! For a chance to see the tour you took on @CambridgeUSA, post to Instagram using #PictureCambridge.