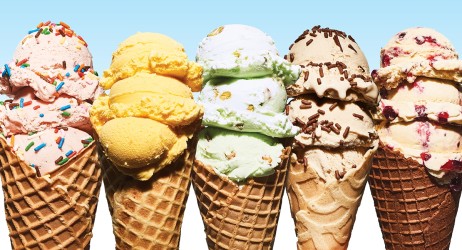 Founded in 2015, New City Microcreamery is a metropolis of fine confections, smooth creams and delectable treats that has been voted the Best Ice Cream in Massachusetts*. They’ve taken ice cream from the wildest imaginations and brought it to life. They created something they believe in; a childhood dream of a utopian society where ice cream rules - and most importantly - it's good. It's really good.

They use a liquid nitrogen process to freeze the cream. After the scratch ice cream base has steeped in its flavor for 24 hours in a walk-in refrigerator, they pour it into a mixer. First, they slowly move the base and introduce the liquid nitrogen, which is more than negative 300 degrees and freeze the base. They then increase the speed on the mixer to aerate the frozen cream and give it its lighter texture and mouthfeel. Using the super-cold liquid nitrogen creates a smaller ice crystal which gives it the smooth New City texture. Plus it's a heck of a show.

Yet New City knows that man cannot live on ice cream alone, which is why they offer locally sourced coffee, paired with bagels and pastries created by their in-house pastry chef. They've breathed new life into morning rituals with handcrafted lattes, their own cold brew and oh yeah - there’s free wifi.

*ranked among all ice cream shops in the state by MassLive in an independent evaluation based on flavor, texture, creativity and overall service.