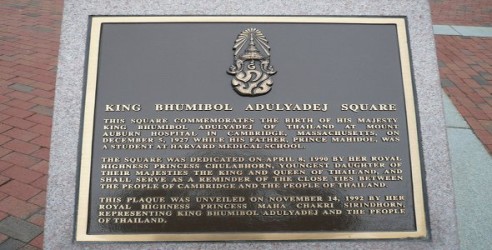 This square commemorates the birth of His Majesty King Bhumibol Adulyadej of Thailand at Mount Auburn Hospital in Cambridge, Massachusetts on December 5, 1927 while his father, Prince Mahidol, was a student at Harvard Medical School. The square was dedicated on April 8, 1990 by Her Royal Highness Princess Chulabhorn, youngest daughter of their Majesties the King and Queen of Thailand. This plaque was unveiled on November 14, 1992 by Her Royal Highness Princess Maha Chakri Sirindhorn.