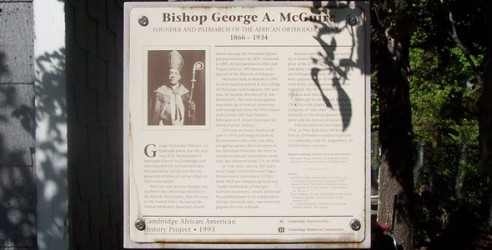 George Alexander McGuire, an Episcopal priest, was the minister of St. Bartholomew's Episcopal Church in Cambridge and later founded the African Orthodox denomination, which was the religious arm of Marcus Garvey's Back to Africa movement. McGuire came to Boston in 1907 to enter medical school at the College of Physicians and Surgeons. Although he broke with Garvey in 1924, his work placed McGuire in the company of "race men" who believed in the development of racial pride and equal rights.