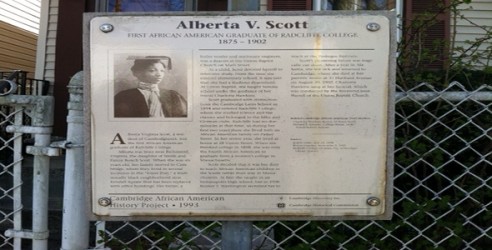 Alberta Virginia Scott, a resident of Cambridgeport, was the first African American graduate of Radcliffe College. Radcliffe had no dormitories at that time, so during her first two years there she lived with an African American family on Parker Street. In her senior year, she lived at home at 28 Union Street. When she finished college in 1898, she was only the fourth African American to graduate from a women's college in Massachusetts.