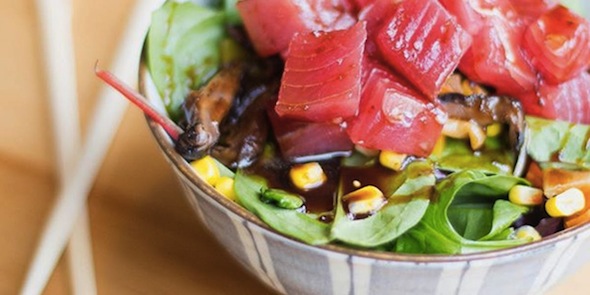 When it comes to Cambridge, are you a gastronomical virgin? Or perhaps you’re without a compass to guide you through the melting pot? Here’s a little something to nibble on as you plan breakfast, lunch and dinner in the City of Squares. Try the restaurants below to fill up on a day’s worth of fun memories. Between pastry, coffee, chilies, sushi and even some jazz, you’ll be left craving your next trip to Cambridge.

Is people-watching your thing? ‘Course it is. Sit by the windows at this fancy café with pastel shades and bustling scenes. You can “do you” while enjoying a smooth macchiato and raspberry teacakes.

From the first brick-and-mortar across the river to 12 Tatte Cafés in the area today, an Israeli woman’s vision has shown fruit. Here we narrow in on the location in Harvard Square, the heart of Cambridge. Tatteis opposite Harvard University and steps away from Harvard Book Store. It has an all-day menu, seasonal selections and tons of gluten-free options.

At Tatte, you can laze, gaze and ponder all things Cambridge. Maybe you’ll recount films shot next door at Harvard. “Good Will Hunting” was never as good as when you sipped on Tatte’s house latte and bit into a soft, cinnamon rose pecan brioche.

You might also start the day at Tatte with their variety of shakshuka or the egg in a hole—two fried eggs in a Jerusalem bagel. To begin the morning on a sweet note, the mini halva bomb is another route you can take. Sweet or savory, breakfast dreams are made of Tatte.

Worth the trip for a romantic meal or a fiesta de uno.

While guac makes its way to the table with piquant salsa, don’t become as bold as Olé’s spices. (Slipping a ring in a taco might not end well...) Instead scan the menu, which has everything from soups to salads, enchiladas to tacos and savory specials to desserts. Ah, dessert! Choose from the churros, rice pudding and flan, their most popular dessert on the menu.

If it’s Mesoamerican on your mind, the gluten-free tamales are stuffed with mushrooms and cheese; put an ear to them, and you might hear Clapton singing “hot tamales.” They are that red hot.

If you’re a taco guy or gal, then tacos al pastor presents a winning pork-pineapple combo. And yup, Olé does Taco Tuesdays. We know you’re wondering that about now! That's tacos for $2 each with the purchase of a margarita.

Affordable sushi and jazz. That’s what you go for.

If you like your Miles Davis with some sushi on the side, The Mad Monkfishis for you. It has a lively bar, glossy red interiors and some of the freshest jazz in town. The Yoko Miwa Trio, among other regular performers, are very much on point. The great Thelonious Monk himself would have raised his chopsticks in affirmation.

The main star of the show is Chef Ginger. Chef Ginger — taken right from the root — keeps every Monkfish walk-in sated with her fusion of Japanese, Chinese, Vietnamese and Thai. You’ll hear a lot about Ginger’s Red Riding Hood roll, which is part of the “fairytale sushi” assortment. The Red Riding Hood roll tastes best with a curious, uninformed bite. In case you’re dying to know, however, it’s packed with spicy tuna and berry coulis.

If adventurous fairytale sushi is not for you, get your happy-ever-after with Mac the Knife maki or the off-key Marie roll. A winter special worth mentioning is the exclusive Japanese madai fish. The madai is like a snapper that can be savored as sashimi or nigiri. Outside the realm of sushi, popular dishes include Monkfish fried rice and Thai masaman curry with chicken.