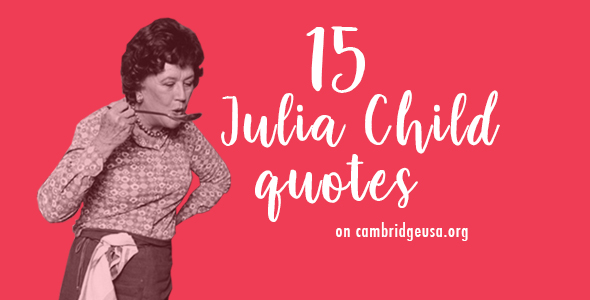 INSPIRATION FOR YOUR HOLIDAY MEALS

To get you in the mood for holiday cooking (and indulging), we gathered 15 of our favorite Julia Child quotes.

Cambridge has been home to many innovators, historical figures, artists, actors, scientists, professors, and chefs, but one of its favorite residents is undoubtedly Julia Child. From 1961 to 2001, the iconic chef, cookbook author and television personality called 103 Irving Street home. While living on Irving Street, her first book,_Mastering the Art of French Cooking: Volume One_was published. Shortly after the book’s release, Julia began filming the television series, the French Chef, in her Cambridge kitchen.

While Julia is known for her delicious and approachable recipes, she is also remembered for her love of butter, quick wit and words of wisdom: