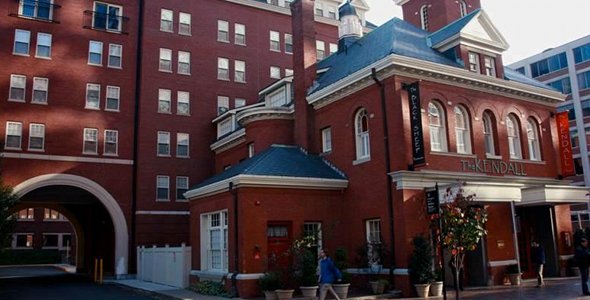 Offering 73 guest rooms and four one-bedroom luxury suites, the Kendall Hotel has been specifically designed with an American folk art motif. The hotel’s fiery history is front and center, allowing guests a unique and luxurious stay.

The Kendall Hotel offers three different meeting rooms, perfect for any occasion, whether you’re looking to host a bridal shower or business meeting. Choose between The Black Sheep Room, the Americana or Engine 7 to host your next event. Your event is bound to be historic.

At the Kendall Hotel, leaving the hotel is simply an option. Complete with the Black Sheep Restaurant, guests never to step off the hotel property. Situated on the street-level of the Kendall Hotel, this historic restaurant follows suit with the Victorian-era theme, and the bar/restaurant is filled with both fireman regalia and Early-American décor.

The Black Sheep Restaurant appropriately honors the “black sheep” of the Cambridge Fire Department and the firefighters of Engine 7. Now, instead of suiting up for a fire, guests eagerly enter the Black Sheep seeking savory dishes and appetizing concoctions, allowing all of the senses to be enriched. Lunch and dinner menus feature classic American dishes, as well as creative masterpieces which include succulent meats and fresh vegetables. One of the best parts about the Kendall Hotel is that all guests enjoy a complimentary breakfast fit for a fireman at the restaurant!

For fitness enthusiasts, the Kendall Hotels offers passes to the nearby fitness center. After you’re done with your workout, head up to the Rooftop Retreat for spectacular views. There, you’ll experience breathtaking skyline views, a 24-hour business center and one hour of complimentary wine, Monday through Friday.

The Kendall Hotel, once previously known as the Engine 7 Firehouse, symbolizes the revolutionary essence that has infused Kendall Square for two centuries. Constructed in 1895, Engine 7 was the first single-purpose firehouse in Kendall Square. In fact, this groundbreaking area is home to several ‘firsts’ such as the first phone call and email.

In 1993, Engine 7 was closed while a more modern firehouse took its place. Artist Charlotte Forsythe and husband Gerald Fandetti took ownership of the building in 1999 and began transforming Engine 7 into a boutique hotel, while still maintaining it’s historical appeal and authenticity.

By 2000, the interior had been updated and a seven-story tower was erected behind the firehouse to accommodate more guests. In 2002, the Kendall Hotel officially opened, establishing itself as Cambridge’s only historic, boutique hotel.

A major transformation occurred in 2007 as an additional seven-story tower was built, housing eight deluxe guest rooms as well as four suites and a Rooftop Retreat.

Fun Fact:11 of the hotel’s guest rooms were once firefighter dormitories.

Activities in the Area

The Kendall Hotel, conveniently located just a couple steps from the red line in Cambridge, allowing visitors to easily access the city and cross the Charles River to other neighboring cities.

Kendall Square is often referred to as the “most innovative square mile on the planet.” Aka… it’s a pretty impressive place to be and stay. Companies like Facebook, Google, and Microsoft all call the square home. Not only is the Kendall Hotel close to major businesses, they’re only a short walk to the Massachusetts Institute of Technology and the MIT Museum.

Located just 40 yards from the MBTA station and walking distance to MIT, the Kendall Hotel is easily accessible from several areas in Cambridge. With buses at your fingertips, you can explore various spots in both Cambridge and Boston.

All photos courtesy of The Kendall Hotel