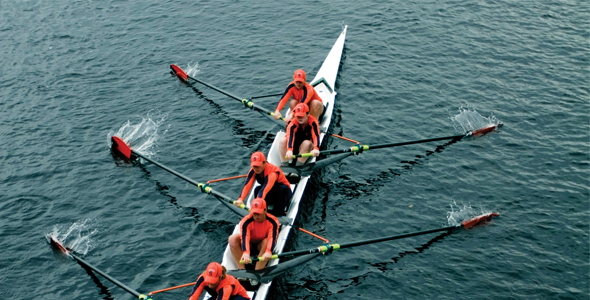 Don't Miss the Largest Rowing Competition in the World

This weekend, you won’t want to miss out on one of our most prestigious fall traditions, the 54rd Annual Head of the Charles Regatta. Gather along the banks of the Charles River with family and friends and cheer on crew teams as they compete in the most popular rowing competition in the world.

Now, 54 years later the Head of the Charles is one of the largest rowing event in the world. Yes, you read that correctly! The prestigious competition hosts 11,000 athletes and draws a crowd of 300,000 spectators.

Rowers from all around the globe travel to compete here in Cambridge each October. Spectators will see crews from all walks of life -- high schools, colleges, adult teams and even Olympians.

It’s a little-known secret that Cambridge is the best place to watch the fierce competition. We suggest grabbing all your friends and family, and even pets to cheer on the rowers. The three-mile race begins at the Boston University Bridge and ultimately ends Christian Herter Park.

Spectators are encouraged to stay throughout the day! With over 55 events, there is no shortage of excitement. See the race begin at Boston University Bridge or if you’d like to catch all the action in the middle of race, where the twists and turns occur, we suggest watching from the Weeks Footbridge.

If you get hungry watching all the scullers, don’t worry! Some of Boston and Cambridge’s tastiest food vendors will be serving up delicious bites all day. We suggest grabbing a bite at the Weld Exhibition, Reunion Village, Cambridge Boat Club or the Rowing and Fitness Expo/Finish Line area.

Outdoor restrooms can be found throughout the three-mile course.

Because this event draws such a large crowd and parking is limited, we highly suggest taking advantage of public transportation. On the days of the Regatta, from 8a-7p on Saturday and Sunday, Memorial Drive will be closed from the Cambridge Boat Club to Western Ave. Hop off the T at either Central or Harvard on the red line and from there, the river is just a quick 7-10 minute walk.

For those flying in for the race, getting to Cambridge is a breeze. You may decide to hail a cab for a quick 15-minute ride, or you can use public transportation. If public transportation is what you decide, simply exit Logan Airport, take the Silver line to the Red line towards Alewife and get off at Harvard Square.

There are also two shuttles that will be available at the event for your convenience: one shuttle runs around the parameter of the course and the other shuttle area runs to the parking area on Birmingham Parkway in Brighton.