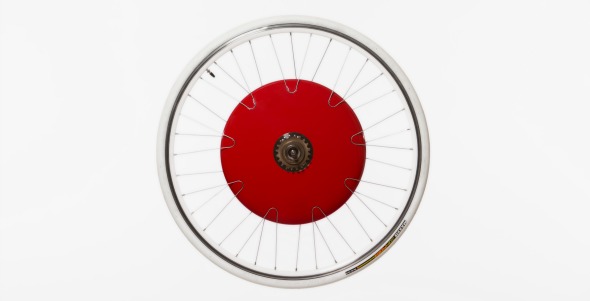 Cambridge may be known for our red brick buildings, prestigious colleges, constant innovations, and as the place where Facebook was invented, but we’re also one of the most bike-friendly cities in the country. With protected bike lanes, thoughtfully placed bike racks and scenic trails along the Charles River, our fair city continuously strives to find new and innovative ways to make biking to any destination the new norm.

With that said, Cambridge is about to get even more bike friendly thanks to the invention of the Copenhagen Wheel. The Copenhagen Wheel was developed right here in Cambridge and promises to totally transform the way we bike. Devised by a group of brilliant minds from MIT, you will literally feel like a superhero when riding with the Copenhagen Wheel: hills become as flat as the streets of, well, Copenhagen, and any distance feels a walk in the park.

Read below to learn more about how “The Wheel” has been reinvented.

It all started with one question: “How do we get more people to cycle?”

Meet the Copenhagen Wheel: a humble wheel with extraordinary abilities. There’s no need to buy a special bike as this wheel simply attaches to the one you already own and love.

Boosting your bike with the Copenhagen Wheel increases your pedal power by 3x-10x. You’ll breeze through the streets of Cambridge using the smart electric hybrid wheel which will transform the way you bike through difficult surfaces. Hills suddenly feel flat, long distances are unexpectedly shorter, allowing you endless options of cycling potential.

Not only does the Wheel encourage consumers to be more physically active in their daily lives but this groundbreaking product supports a healthier environment. Helping to alleviate the reliance on transport that pollutes, the Copenhagen Wheel will make you want to jump on your bike, rather than in your car. Once electricity generates during braking, it is then transmitted into energy when pedaling which makes biking a difficult route much less tiresome. Say goodbye to long commutes and tired legs.

What do the Mayor of Copenhagen and MIT have in common?

This may sound like a funny question, but once you read on, you’ll wonder why these two parties didn’t find each other sooner.

MIT’s SENSEable City Lab began reinventing the wheel as a research project that was sponsored by the Mayor of Copenhagen, another super bike-friendly city. The Mayor wanted to find a way to make biking more attractive to his citizens, and that’s exactly what the geniuses over at MIT were able to accomplish. They only needed someone to get their mission off the ground, and into the lives of bike enthusiasts everywhere. That’s where Superpedestrian comes in.

Superpedestrian acquired an exclusive license from MIT in December of 2012, which helped the Wheel transition from research project to an innovative product that has that has captured a wide audience. Not only will this change the way we think about biking, it can even the way we plan our city streets. The inventors hope the Wheel will rebuild communities, interconnect cities, and act as a true example of what true 21st-century infrastructure can look like - human-centric and efficient. If this doesn’t sound like Cambridge, we don’t know what does.

Biking is the New Driving

Home of the Green Streets Initiative, Cambridge is proudly recognized as the “Healthiest Overall City,” not to mention 80% more residents walk to work than any other city in the country, making the Copenhagen Wheel a perfect addition to our city’s lifestyle. With the use of the app, bikers can plan out healthier bike routes and map out exercise goals. The Wheel has already influenced residents to commute via biking rather than other popular means of transportation like cars, buses or subways. Now you can look forward to that morning commute rather than feeling overwhelmed.

Your Commute Will be Transformed

Once you try the Copenhagen Wheel, your biking experience will never be the same. The “Wheel” essentially acts as your riding companion to provide you with a seamless experience. You’ll forget the wheel is even there because it responds directly to how you actually ride your bike, revolutionizing the way both novice and professional cyclists navigate throughout the city.

When you attach the Copenhagen Wheel to your bike, you’ll gain a completely customizable rider experience. That means you can control how much help you want from the wheel itself: either exclusively on those dreaded hills during your commute or throughout your entire ride, all via your smartphone.

The Experts Love The Copenhagen Wheel

It’s no wonder the Copenhagen Wheel has already received several design awards and has been reviewed in over 1,000 media publications such as Wired, BBC and the New York Times. TIME Magazine has certainly noticed the advantages of the Wheel, naming it one of the 25 Best Inventions. Pretty snazzy huh?

Now that you’ve read about the Copenhagen Wheel, it only makes sense to take the Cambridge invention out for a spin. Simply rent the wheel for only $15 for an entire day (10a-6p) at Superpedestrian and you’ll never look at your bicycle the same.

If you’re visiting the city and want to see the Cambridge from the seat of your bike, renting the wheel is definitely the way to go. We couldn’t think of anything more quintessentially Cambridge than testing out a Cambridge invention.

Tell us, will you give this Cambridge invention a go?

All photos courtesy of Superpedestrian