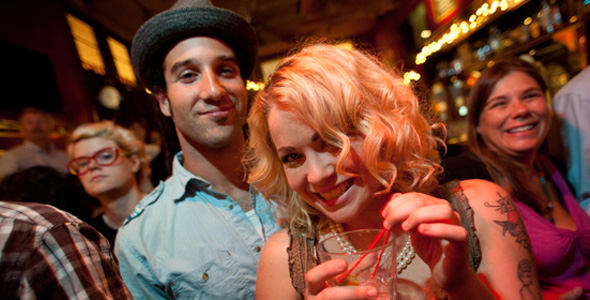 Welcome to Cambridge, the most culturally vibrant, intellectual, and, if we don't say so ourselves, hipster-friendly city in Massachusetts. While there are probably all sorts of nice educational, family-centric, and artistically fulfilling things for you to do during your days here, as someone who writes about nightlife, bars and music for a living, I honestly I have no idea what those things are. But if you're looking for places to go after dark, you've come to the right place.

A good way to think of Cambridge is as the Brooklyn to Boston's Manhattan. Actually, Boston itself is kind of just one big Midtown, meaning it's mostly touristy, over-priced, and filled with out-of-towners (no offense!). Cambridge is where everything relevant happens anyway.

Broken up into a few neighborhoods, or squares, as we call them, like Harvard, Central, Porter, Inman, and Kendall, each part of Cambridge has a particular character that colors the bar and music options. You'll find whatever it is you're looking for in at least one of them, unless you're looking to stay out past 1 or 2, in which case you're plain out of luck on that front. You should get some rest anyway, you've been traveling.

Harvard Square is the most prominent area for tourists, and locals will bemoan to no end how it's lost much of its unique character over the years, trending toward a more chain-friendly open-air shopping mall district. That's mostly overstated. There are plenty of standout options for cocktails and dining, both high and low. Russell House Tavernis leading the charge with a gastro-pub aesthetic that splits the difference between high-minded spirits and cocktails and expertly made comfort food. Nearby, the bar at The Charles Hotel, Noir, has been in the mix with the retro-cocktail revival for years. The dimly lit room changes over from a quiet, romantic lounge by early evening, to a thriving scene late at night. Since it's one of the only bars in the area open until 2, it's where all the night owls flock for last call, particularly in the warmer months when the patio is open. Across the street the weathered old diner-style dive bar Charlie's Kitchenis where the hipsters and frugal students go for cheap cans of beer and hamburgers to make the cheap cans of beer go down easier. Nearby Shay's Pubpacks in beer-drinkers onto their subterranean English-pub style basement. It's a short walk from the Charles River, where you can take a stroll if you're into, you know, nature or whatever.

A little further outside of the Square, up Mass. Ave toward Porter, you'll find a plethora of longtime Cambridge favorites and hidden gems. The French Cuban bistro Chez Henriis the venerable old draw. Ever heard of a little drink called a mojito? They popularized those years back, and were instrumental in the revival of the cocktail scene in Boston. Their Cuban sandwiches are rightfully praised by publications local and national for their salty decadence. Around the corner the West Side Loungeis a dimly lit, cozy and hip spot mixing up some of the city's best cocktails. Speaking of which, the loungy, subterranean Lizard Loungeacross the street, another seminal bar in the city's cocktail and music scene, hosts an eclectic lineup of live music most nights of the week in one of the most intimate, unique spaces you'll find. Upstairs, Cambridge Commonis a beer geek's haven, home to a wide range of rotating taps, cask ales, and all manner of local specialty brews. In Porter Square proper, Toadis a great, understated music venue and bar where some of the city's best talent sits in on any given night. Newtowne Grillacross the street is a sporty dive bar for an unpretentious beer and a pizza.

Heading down Mass. Ave in the other direction you'll make your way toward Central Square, which is where the real action is, particularly for music lovers. Before you get there, stop off at the Garden at the Cellar. An innocuous seeming dive bar anchors the basement, while upstairs a culinary gem awaits. Former chef Will Gilson, nominated for a James Beard award, transformed the cuisine here during his tenure, and it remains an under-utilized gem.

Next stop is the Plough and Stars. This tiny little pub is home to a great music scene, with rootsy Americana and jazzy acts setting up shop in the cramped back corner. It's a pretty great depiction of what Cambridge's underground arts world looks like when it heads out for a pint. The food is way better than it has any right to be too. Nearby the People's Republikis a winking nod toward our famously lefty politics in Cambridge. Soviet-era propaganda keeps an eye over the proceedings while revelers play darts and toss back frosty pints, plotting the overthrow of the capitalist system or whatever it is we all do here.

In the heart of the Square is the venerable Middle East Nightclub, which has long been the center of live music in Cambridge, particularly of the indie rock variety. With four distinct rooms hosting music almost every night of the week, it's a good bet you can wander over whenever you happen to be in town and find something you like, from national touring bands, to homegrown talent, to DJ dance parties to belly dancing or comedy. Around the corner the small, but no less beloved TT the Bear'shas a quality schedule of rock bands as well. For the electronic music fans, the Middlesex Loungechanges by night from the hippest forward-thinking EDM venue around, particularly with nights like the long-running Make It New on Thursdays, to a populist hip hop and top 40 dance club on the weekends with a line out the door. Phoenix Landing, a seemingly innocuous Irish pub by day, turns into one of the city's premier electronic clubs, with international drum and bass, house, and techno talent adding a cool European vibe to the room. Naga, a newly opened, much bigger nightclub, is hidden back behind the Asian fusion restaurant Moksa, both worth checking out.

For cocktails, you came to the right place. Green Street Grill, a remodeled little old neighborhood bar is the real deal, with bartenders who've been plying the craft cocktail trade since before anyone knew what that meant. Brick and Mortar, a relatively new entry, might literally be home to Cambridge's most knowledgeable bartenders. You won't get a bad drink there, they wouldn't know how to make one. Likewise, Craigie on Main, home to the widely acclaimed chef Tony Maws, features expertly made drinks and food in their bar lounge. The restaurant itself is not to be missed either, especially for those with an adventurous palate. If divey holes in the wall are more your speed, the ancient Cantab Loungeis the melting pot of sorts for drinking by day. The gritty old bar turns into a venue by night, with rock, blues, and bluegrass bands propped up in the corner setting a soundtrack to the doomed souls wasting the night away.

Inman Square has long been the overlooked little brother square of Cambridge, maybe because the T doesn't stop there, but if you want a more “authentic” Cambridge experience, it's a short walk from either Central or Harvard. East Coast Grillnearby is one of the city's most beloved restaurants, particularly for seafood and barbecue lovers, while Bukowski's Tavernis the hipster hotspot with a huge, well-crafted beer selection. Down the street toward Kendall is Lord Hobo, with one of the most in-depth beer selections in the city.

Kendall is most famously known as the center of technology in Cambridge, but that's fast becoming overshadowed as it develops into the city's new culinary mecca. New restaurants like Abigail's, Area IV, Catalyst, and Kika's Tapas, all bring a wide variety of dining options for foodies and the type of people who can't eat a meal without taking a photo of it first. Mainstays like Hungry Mother, an award-winning Southern-style cooking outpost, and The Blue Roomare probably your safest bets. Emma's Pizzaisn't to be missed for the pie-lovers in the group, and Cambridge Brewing Companyis home to one of the longest running brewpubs in the city. They churn out a dozen or so of their own brews, with styles rotating seasonally. If that's not enough beer for you, try Meadhall, with over 100 beers on tap. Just make sure you make note of where your hotel is beforehand, you're going to need to explain to the cab driver how to get you back.