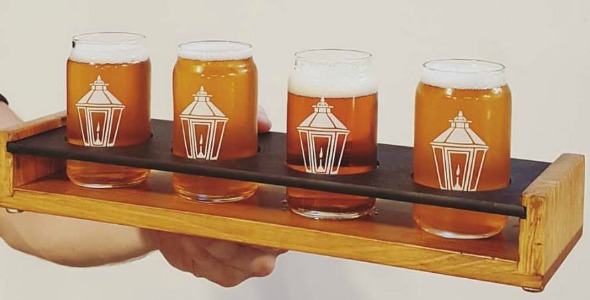 Everyone knows about Boston’s famous Sam Adams and Harpoon beers, but did you know Cambridge also boasts an exciting and innovative collection of locally-made beer?

To help you find just the right Cambridge brew while you’re visiting, we’ve put together a quick guide to Cambridge’s breweries. After all, there’s no better way to get to know our unique city and culture than through local beer.

Located where Kendall Square meets Central Square, you’ll find Cambridge’s newest brewery: Lamplighter Brewing Co. At Lamplighter Brewing Co., beer enthusiasts will find unique beers that you probably haven’t tried before. Expect to see (and drink!) Brettanomyces fermentations -- a beer that in Lamplighter’s words is described as “a whole lot of sour, funk, and is a lot of fun.”

The self-proclaimed funky beer is brewed right on the premises in what used to be Metric Systems, an auto repair shop. While Lamplighter is still working on perfecting their taproom (good things come to those who wait), you can still order beer at their growler counter and purchase some swag.

If beer isn’t your thing, don’t worry, Lamplighter has you covered. During the day and early morning, the brewery turns into Longfellows, a coffee shop, bakery and community space where they’ll be brewing up coffee, instead of beer. Like Lamplighter, everything at Longfellows is sourced locally, from cold brews, to housemade soda and kombucha, and a top-secret-coming-soon chocolate drink from our Somerville neighbors at Taza Chocolate (!!).

Getting There: We highly suggest taking public transportation to get to Lamplighter. From Harvard Square, simply hop on the 68 bus and get off at the Columbia Street stop. If you’re traveling by T, take the red line to Central Square and from there, it’s a quick ten-minute walk.

FYI:See Lamplighter Brewing Co. at the Local Crafts Spirits Festivalthis Saturday at the Landsdowne Street Quad, next to University Park in Central Square.

Nestled in the heart of One Kendall Square, you’ll find the Cambridge Brewing Company, one of Cambridge’s oldest breweries. The former mill building has been transformed into a beer lover’s dream, toting around fourteen American craft style beers on tap daily. All of CBC’s beers are brewed on-site, making it nearly impossible to find a fresher beer.

Insider Tip:Try the Cambridge Amber- just like the city it was named after, this beer is a medium-bodied, deep amber-red color with hints of caramel and a slightly roasted finish.

Getting There:CBC is located in One Kendall Square, which is extremely accessible by both public transportation and car. If you’re taking public transportation, simply hop on the red line and get off at the Kendall T Station. From there, CBC is just a quick ten-minute walk. If you’d prefer to drive, there are many metered spots along Hampshire and Broadway Street, as well as validated parking at the One Kendall Square Parking Garage.

We go way back with beer here in Cambridge. Our very own John Harvard, whom Harvard University was named after was an avid brewer. John Harvard's beer recipe was even found in one of his book collections that he gifted to the university.

Cut to present day, where John Harvard’s Brewery & Ale House in Harvard Square continues the spirit of John Harvard. Head into the brewery for rotating John Harvard brews on tap, along with special guest beers. This is a perfect place to visit if you want to taste a part of Harvard’s history.

Insider Tip: Because the beers on draught are constantly changing, we suggest calling John Harvard's Brewery & Ale House before you get your heart set on a specific beer. We love the Brattle Blonde and Dunster Pale Ale -- and not just because they’re named after Cambridge city streets.

Getting There:Take the Red Line to the Harvard T Station. Once you’re in Harvard Square, John Harvard’s Brewery & Ale House is a quick three-minute walk down Dunster Street.

Hop on over to Lord Hobo in Kendall Square if your favorite type of beer is an IPA. Known for their creatively named beers and their double IPA "Boomsauce," Lord Hobo is a haven for beer drinkers. If IPA’s aren’t your thing, Lord Hobo has one the best selection of local beers around, that are sure to please any palate. Not to mention they have a great late night menu (we're partial to the truffle fries) and a delicious brunch menu that pairs perfectly with any of their beers.

Insider Tip:We suggest trying Lord Hobo’s Steal This Can IPA. After one sip of the slightly bitter, but moderately strong American Pale Ale, complete with supporting notes of both malt and hops, you’ll quite literally want to steal ALL of the cans. Resist the urge!

Getting There: If you’re traveling to Lord Hobo from Harvard Square, we suggest hopping on the 68 Bus. The bus will bring you to Windsor Street, where you’ll get off. Then, it’s just 0.1 miles walk to Lord Hobo.